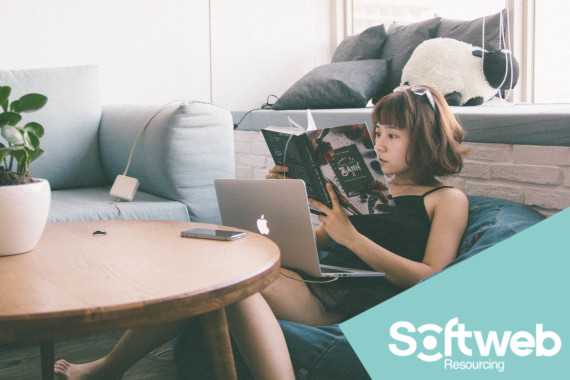 The spotlight has never shone brighter on companies and their gender pay gap differences than it has today, and yet staggering inequalities endure. Last year it was revealed that the publically funded BBC was home to a 6.8% gender pay gap; while just this week a study reported that 9 out of 10 public sector bodies pay men more than women. Over in the private realm, 2018 kicked off with a right royal row, when Netflix admitting paying Claire Foy, star of the smash-hit ‘The Crown’, less than her on-screen husband (heck, when even the Queen isn’t getting paid fairly, you know there’s a problem).

In our realm – technology - the most staggering stat comes from embattled social giant Facebook – where there’s a record-breaking 41.5% pay gap on bonuses.

Despite these figures coming from public organisations and private companies, women not only have a place in both arenas, but they are actually proven to deliver some compelling advantages. Yet if we’re ever going to capitalise on what they can bring to the table, change must be brought about – the main question being – how?

The Gender Divide – A Gloomy Forecast for Females

Just 17% of UK tech positions are filled with women, and this already lowly figure falls to 11% when we move across the pond to not-so-sunny-for-women Silicon Valley – where just 11% of executives are female (which may not be such a surprise, given that just 0.4% of female college freshmen major in computer science).

But it’s not just how few women there are in tech that’s staggering – it’s also how little they are paid, compared to their male contemporaries – with men earning 25% more than women on average. And these figures may not even be a true reflection of just how wide the gap really is, as Google, and other tech companies, regard (and openly admit) that collecting data on wages is too “time-consuming and burdensome”. (Yup. That’s one of the world’s biggest analytics business in the world - you know, the search engine that answers 3.5 billion of the world’s questions, each and every day).

On balance, it’s little wonder why the quit rate is more than twice as high for females (41%) than it is for males (17%), and the figure for female tech entrepreneurs is just as depressing, with just 5% of start-up owners being female.

On a brighter note…

Despite the melancholy outlook for women in tech, this blog isn’t all about inequality and unfairness, naming and shaming or doom and gloom. Instead, we look to the positive steps forward– and in return, what women are bringing to the table, such as the fact that women-led companies perform three times better than those with male CEOs; and how companies have been proven to benefit from improved communication skills, innovative ideas and an increase in morale where a larger number of females are amongst the workforce.

Women in tech - Five ways to address the many challenges…

So, what can be done to harness a fairer (and perhaps more profitable) landscape for all?

“The time is long overdue to encourage more women to dream the possible dream”.

First and foremost, this topic must be given the time and effort it deserves (on which note, 40% of females say that their company doesn’t spend enough time ensuring that diversity has been addressed).

“If we do not share our stories and shine a light on inequities, things will not change.”

Second, hiring processes may benefit from an overhaul – and the debate as to whether gender quotas are a way forward given at least grounds for being heard, trialled and tested. This, in turn, may contribute to a growing number of females who then lead future hires.

“I’ve never thought of myself as a female engineer, or founder, or a woman in tech. I just think of myself as someone who’s passionate”.

Third, mentorship programmes led by females could help to support women within a tech business, and their progression onwards and upwards to the C-Suite. Such programmes are already in place at businesses such as Apple, Facebook and Google.

“I have very personally felt the overwhelming loneliness, self-doubt, and frustration that often comes with the minority status of a woman in engineering... the more women (and minorities) that enter and don’t leave the field, the better it all gets for everyone, including me!”

Fourth – policy-makers and industry organisations should be proactive in attracting females to the industry. A prime example of this in action was the 2013 national US campaign for Women in STEM.

“The Administration’s $4.35 billion Race to the Top 2009 competition focused not only on encouraging states to develop comprehensive strategies to improve achievement and provide rigorous curricula in STEM subjects, but also to broaden the participation of women and girls”.

Fifth, and perhaps most powerfully of all, there is arguably much to be done at grassroots level to disrupt traditional thinking – to interest and encourager girls, from the earliest of ages, in tech – to challenge the traditional career options that females pursue. This may, to some extent, happen naturally in the UK – owing to the Government’s 2013 changes to the curriculum that introduced primary age school children in coding. Yet even this isn’t without it’s challenges, not least of which is the typically non-computing backgrounds of teachers who’ll be responsible for delivering the course content.

“The huge challenge is to make sure all our teachers are able to be confident and enthusiastic about teaching the subject, which isn’t going to happen by the end of this month”

“There is a huge variation in the kind of computing background that teachers have got: a very tiny handful have a degree in computer science, but for most of the teachers, they are going to be teaching a brand-new subject”.

It’s clear – there’s still much to be done to capitalise upon the promise that women have in the world of tech. None of the answers are easy, nor will change be anywhere near immediate.

True transformation can only come about as a combined effort between companies, government, parents, teachers, leaders and, ultimately, females who are eager, ready and committed to learning, advancing and, eventually, leading.